Opening routes for renewables in the transport sector

Greenhouse gas emissions from fossil fuel use in the transport sector have been rising and are predicted to further increase in the future. Only renewable energies can reverse this trend. Against this backdrop, Gerard Reid from Alexa Capital explained current developments in a market still dominated by fossil fuels. “Despite the current slump in oil prices, technological change is ongoing and this change favours renewable solutions for the transport sector”, he said. Reid expects that fossil fuel prices on world markets might take another dip in the short term. “However, in the mid and long term, oil will certainly become a lot more expensive again”, Reid stressed. 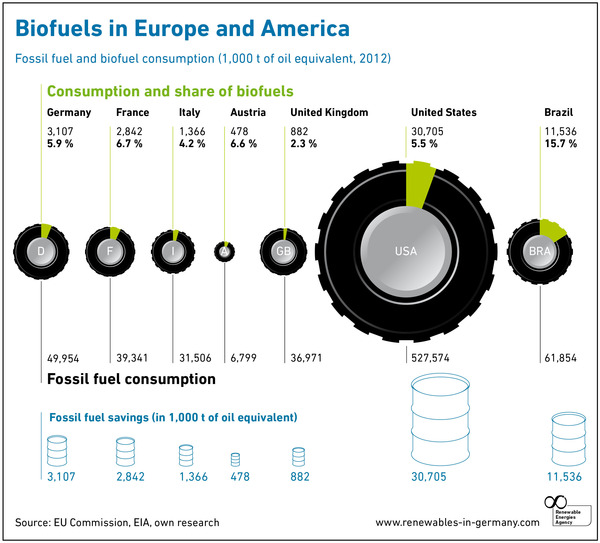 Despite slipping oil prices emerging economies have continued to invest in renewable energies, This includes the transport sector. “Production of biofuels in several Asian and African markets has expanded rapidly in recent years”, explained Adam Brown, Senior Analyst from the Renewable Energy Division of the International Energy Agency (IEA). He warned that shifting policy grounds in established markets such as the EU could undermine medium-term growth in biofuel production. „A stable, long-term policy framework, including clear sustainability guidelines, will be vital for further growth“, Brown said.

As Olivier Dubois from the Food and Agriculture Organization of the United Nations (FAO) pointed out, sustainability of biofuels is context specific. “Their assessment must be based on reality, not models and global studies, and we have the knowledge and tools to do it”, the FAO expert underlines. “The perfor-mance of biofuels depends on how they are managed. They should be viewed as another opportunity for responsible investment in sustainable agriculture and rural development”, says Dubois, who is Leader of the FAO Energy Team.

Carlo Hamelinck from Ecofys talked about the environmental performance of biofuels. In a recent study, Ecofys estimated that the marginal greenhouse gas (GHG) emissions avoided by the introduction of biofuels are approximately 115 g CO2 equivalent per megajoule (MJ). This is 37 percent more than stipulated in the EU Renewable Energy Directive (EU RED). “The GHG avoidance of sustainably produced biofuels in the EU is significantly higher than currently calculated on the basis of the EU RED formula”, Hamelinck underlined.

Patrick Schmidt from Ludwig Bölkow Systemtechnik pointed to the opportunities offered by alternative drives such as electric cars for a sustainable transport future. „In the mid-term I expect a wider range of fuels and drives on Europe's roads. This includes a boost for e-mobility in all its forms. If we miss to lift potentials here, we should be serious about downsizing our car fleets“, urges the electrical engineer who is part of the Advisory Council of the German Transport Ministry on its Mobility and Fuel Strategy.

Philipp Vohrer, Managing Director of the Renewables Energies Agency (AEE): “In the European Union, we have the resources to reach the 2020 target of 10-percent renewables in the transport sector by means of sustainably produced, home grown biofuels. However, biofuels are only part of the equation. Saving energy, i.e. driving less and using smaller cars as well as the further market penetration of alternative drives such as e-mobility will have to expand soon”, Vohrer urges.

AEE background paper „Renewables in the transport sector - which routes are open?“ »